The beginning of the Silurian was marked by a distinct deepening of the sedimentary conditions, probably caused mainly by a sea level rise after the melting of the ice sheet in the Southern Hemisphere. Facies unification and disappearance of the Late Ordovician sedimentary zones are to be noted. In all regions appeared graptolite shales (Fig. 4) 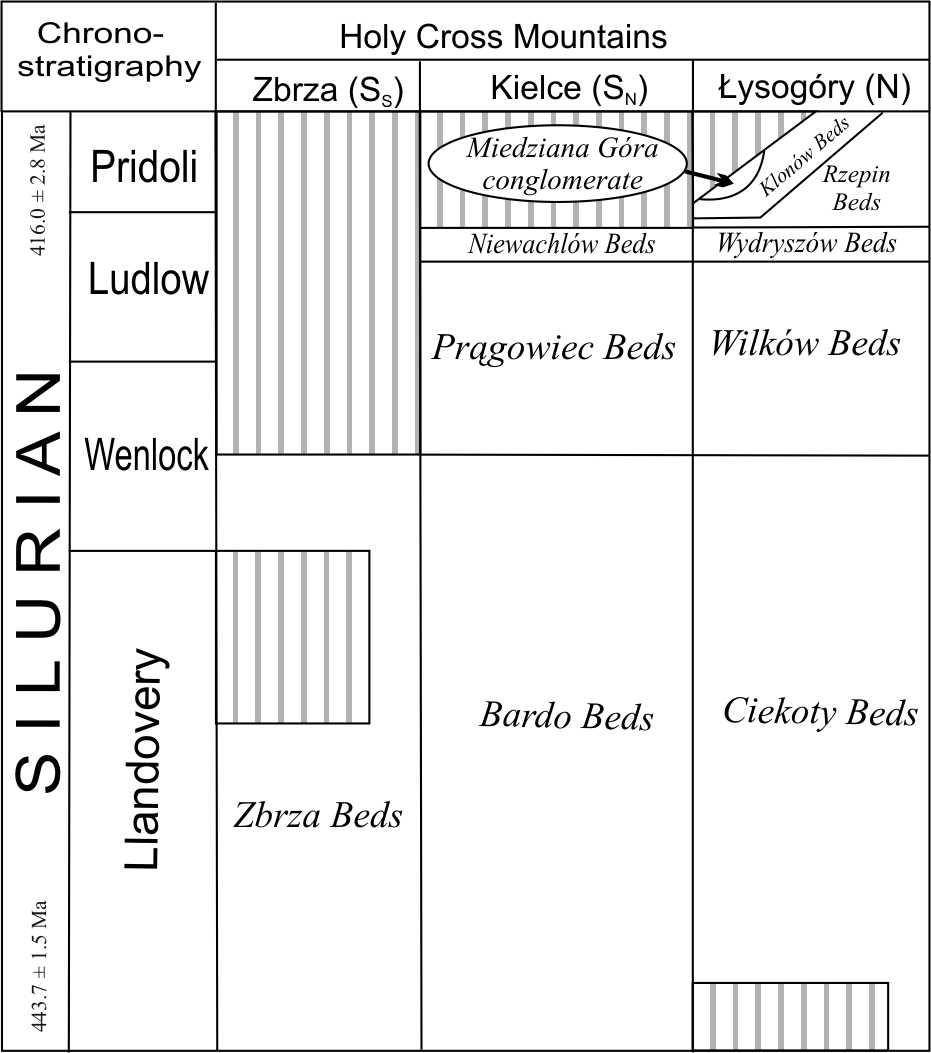 Fig. 4. Simplified lithostratigraphic scheme of the Silurian in the Holy Cross Mountains (after Tabela Stratygraficzna Polski [Stratigraphic Chart of Poland] 2008)

in some cases with thin beds of siliceous rocks (Malec 2006). An expected feature is the appearance of numerous radiolarians (planktonic microorganisms living in the ocean, whose skeletal remains cover the ocean floor and are later found in deep sea facies) in these shales, contrary to the presence of cyanobacterial mats, described by Kremer and Kaźmierczak (2005), usually formed in much shallower settings. An alternative solution is to accept a hypothesis suggesting the occurrence of free-swimming cyanobacterial mats in oceanic surface waters.

The same type of calm and deep-marine sedimentation prevailed during most of the Silurian. The shales gradually contained less siliceous interbeds, which were replaced by carbonate intercalations and concretions. A significant facies shift took place several million years before the end of the Silurian, in the middle of the Ludlow Epoch, when coarse-grained greywackes suddenly appeared. Apart from quartz and feldspars, the greywackes contain fragments of various older rocks, both sedimentary and magmatic, including extrusive and intrusive types. The source areas of these rocks were located to the west of the Holy Cross Mountains basin, and genetically encompassed a continent-volcanic arc suture zone (Nawrocki et al. 2007; Kozłowski et al. 2014). The thickness of the greywackes reaches 1500 m in the Łysogóry Region and maximally 500 m in the Kielce Region (where the primary thickness was reduced by later erosion). The sedimentation rate of the greywackes was several magnitudes higher than the sedimentation rate of the underlying shales, thus the deep Silurian basin filled up and became shallower until the appearance of interbeds of shallow marine carbonate facies (e.g. oolite limestones), characteristic of the Rzepin Beds exposed in the Bronkowice Anticline and in the vicinity of the large village of Nowa Słupia (Winnica and Rzepin exposures; Kozłowski 2003).

Such a succession of sedimentary rocks is usually interpreted as typical of a Caledonian foreland basin, in which the Kielce Region represents the proximal part of the basin, closer to the orogen, whereas the Łysogóry Region is the distal part of the basin. This hypothesis is confirmed by tectonic deformation, clearly visible in the vicinity of the village of Bardo in the Kielce Region, where strongly folded Cambrian, Ordovician and Silurian rocks are unconformably covered by only slightly folded Lower Devonian strata. In the Łysogóry Region such an unconformity is not observed and the transition between the Silurian and Devonian is most probably continuous.

An interesting lithology that appears in the upper Silurian succession of the Kielce Region in conjunction with the folding of the distant Caledonian orogen is an over 10 m thick complex of subvolcanic rocks – diabases – located between graptolite shales and greywackes. Recent studies (Nawrocki 2000) have indicated a late Silurian age of this intrusion, which formed after the deposition of shales and greywackes but prior to their folding and was injected into the boundary zone between the two massive rock complexes.

Thus, at the Silurian/Devonian boundary, the area of the Holy Cross Mountains (or at least their southern part) became mountainous for the second time in its Phanerozoic history. The folded and uplifted complexes supplied large amounts of clastic material that gathered in the foreland of the mountains and in depressions between them. The most typical record of the post-Caledonian processes is the Miedziana Góra Conglomerate, at present poorly exposed in the south-eastern part of the city of Kielce. According to Szulczewski (1995, 2006), the formation of this sediment was associated with alluvial fan settings; there are, however, also different opinions about the nature of this complex (submarine fan – Malec 1993, 2001; deltaic fan – Kowalczewski et al. 1998). There are also contrary views on the transport directions (from the north or from the south) of the clasts composing the conglomerate, or even its age (late Silurian or Early Devonian). In extreme cases the difference may reach about 10 million years; detailed reviews of this fascinating issue can be found in Malec (2001) and Szulczewski (2006).

Despite the discrepancies linked with the interpretation of this small and poorly exposed complex, it seems rather obvious that the Miedziana Góra Conglomerate terminates the early Palaeozoic sedimentary-diastrophic stage, and the beds lying above represent the succeeding, late Palaeozoic stage which lasted till the end of the early Carboniferous. As mentioned above, any interpretation of this early stage requires discussing the palaeogeographic relationships of both parts that currently form the Palaeozoic of the Holy Cross Mountains. Although attempts to solve this issue have been made for many years, so far there is no consistent opinion.

Differences in the lithologies of particular successions, different positions of stratigraphic gaps and unconformities, coupled with different tectonic styles in both regions of the Palaeozoic of the Holy Cross Mountains were noted by its first surveyors; as a result, the terms Łysogóry and Kielce regions were introduced (e.g. Czarnocki 1919, 1957). The evolution of ideas has over the years led to an extreme opinion, treating both regions as separate terranes that in the early Palaeozoic became attached to the south-western margin of the Baltica palaeocontinent. The dispute concerned the origin of these terranes and the time of their merging into the present-day structure. Possible options included a peri-Gondwanan (exotic terranes – blocks detached from the Gondwana palaeocontinent) or peri-Baltic origin (proximal terranes – blocks neighbouring during their history with the margin of Baltica). The collision time of particular elements of this ‘jigsaw puzzle’ is also ambiguous: from Neoproterozoic to Variscan times. Research methods engaged to solve the problem of the palaeogeographic position of particular blocks have ranged from palaeomagnetic data, biogeographic analysis of the available fossils (trilobites and brachiopods) and analysis of the age of detrital grains in the clastic sediments. Some of the arguments include the Baltic affinity of Ordovician brachiopods or the same source of greywacke material deposited in the late Silurian in both regions. A short but concise introduction to this issue can be found in a short paper by Nawrocki (2006) or in more specialist reports by Lewandowski (e.g. 1993), Belka et al. (2002), Jaworowski and Sikorska (2006), Kowalczewski et al. (2006), and Nawrocki et al. (2007). Relatively few doubts are raised for the origin of the Łysogóry Region; a dominant interpretation treats this area as a fragment of a mobile margin of the East European Craton (Malinowski et al. 2005). The position of the Kielce Region, usually included within a larger unit – the Małopolska Block – is variously interpreted by palaeomagnetists. According to Nawrocki (2006), at least from the mid-Cambrian times the Kielce Region was close to the margin of the East European Craton. In contrast, Lewandowski (1993) assumed that this event took place much later, because as late as in the Carboniferous the position of the Kielce Region in relation to the East European Craton was relatively stable. Analysis of the distribution of lithostratigraphic units indicates that already in the Devonian both parts of the Holy Cross Mountains were merged, although strike-slip movements between both parts cannot be excluded, as pointed out by Szulczewski (2006). There are also opinions negating the mobility of both blocks in the Palaeozoic, because the Cambrian in both regions is similar to that from successions of the East-European Craton (Dadlez et al. 1994; Jaworowski and Sikorska 2006).

Notwithstanding these controversies, it has to be remembered that the history of the Holy Cross Mountains during the early Palaeozoic took place in the Southern Hemisphere, and that at the beginning of the Devonian the area was located close to the equator. The prevailing climate had a large influence on the development of sedimentation in the Devonian and Carboniferous.